Sometimes it’s the parents who admit they aren’t keeping a safe distance from hunger.

But mostly it’s the children who tell the tale, says Vanessa Mani, the Enhanced Services worker at Lord Selkirk Elementary in East Vancouver.

“I have to deal with parents in tears,” said Mani.

Other times there are no need for words. The picture is clear enough.

“We have one child, a lovely boy, he’s one of those who’s always late for school or doesn’t show on Fridays — well, OK, there are reasons — but on Monday mornings he’s always here at five-to-eight because we open the doors at 8 a.m. and he helps with the chairs for the breakfast program.

“But he eats four or five muffins every time — you can’t unsee that, you can’t unknow that.”

It’s a spectre of weekend hunger that she’s trying to overcome.

Right now the resources she has are being stretched. She is asking The Vancouver Sun’s Adopt-A-School campaign for $5,000 to supplement supplies of emergency food she receives from Isthmus, a charity organization that provides weekend food to needy families.

She needs to feed 48 families with 60 children, many of them working poor families unable to buy the food they require after paying rent.

This represents 10 per cent of the school population.

“I tell the kids, if they are really struggling at home, to tell me and we’ll work something out.”

They live in an area of Vancouver that has undergone gentrification due to the increase in real estate prices and so the school — which also offers French immersion — is not now considered inner city.

Whereas in the past a free lunch was offered, now parents are expected to pay $5 a day for their child’s lunch.

The school has a subsidized breakfast program for needy children that serves 40 children a day and 30 receive a free lunch. Daily snacks are provided by the Vancouver Firefighters Union.

All that takes care of their food while at school.

But Mani is concerned about when they go home and particularly what they have to eat at weekends.

“This is my tenth year at Selkirk,” said Mani, who has lived all her life in the neighbourhood around 22nd and Commercial.  “The amount of students showing up hungry has easily doubled.

“When they come to school they know they will get breakfast, lunch and snacks but dinner is a different story and many families can’t afford well-rounded meals. Many of them are using the Food Bank.

“These families are hardworking and proud but they can’t make enough of a living to cover the cost of residing in Vancouver. The level of socio-economic vulnerability at Selkirk is alarming.

“The gap between the haves and the have-nots is getting larger and larger,” she said.

When she comes to divvy up the food to send home at weekends she often finds herself short 15 to 20 portions.

“We don’t have enough to go around,” she said.

Mani has to redistribute supplies to make sure that 25 families with two or more children get a little more.

“No one goes without but it’s not enough and everyone has to do with a little bit less.”

The weekend food usually consists of packets of pasta, such as Sidekicks, macaroni and cheese, or ravioli, instant oatmeal, instant noodles — “always instant noodles, the kids really like that. But it’s the same food every week because it’s cost effective.”

She has been sending home surplus food and milk from the breakfast and lunch programs to parents who have come in asking for extra help.

“I connect them with the Food Bank and Cedar Cottage Neighbourhood House but they are like us and don’t have enough resources. We are all vying for the same pool of money.”

She would like to have a reliable source of extra food to get these families through weekends and vary the menu.

“If I could buy them a pound of butter for the month or give them bread and bagels and cream cheese — things you take for granted when you’re not counting every penny. And if I was to get them pancake mix and syrup I’d like to get them something other than no-name stuff.

“I know a lot of people would disagree but these kids don’t get anything. Anyway, I’m picky about food. If I won’t feed it to my own children I’m not about to give it to the most vulnerable children in this school.”

If she gets extra funds she will go to the parents and ask what they’d like to have.

“If they have pasta one week maybe rice and something else the next. I’d like to put together a menu for them.” she said.

“One of the heartbreaking things I hear — and I’ve heard it too many times — is parents not eating so their children can have more.”

(Before this story was published, Gotham Steakhouse and Cocktail Bar in Vancouver donated $1,750 to AAS for this school after viewing a list of schools needing help on the Adopt-A-School web page.) 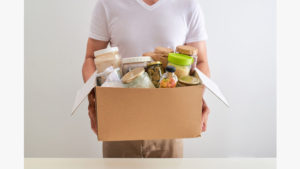