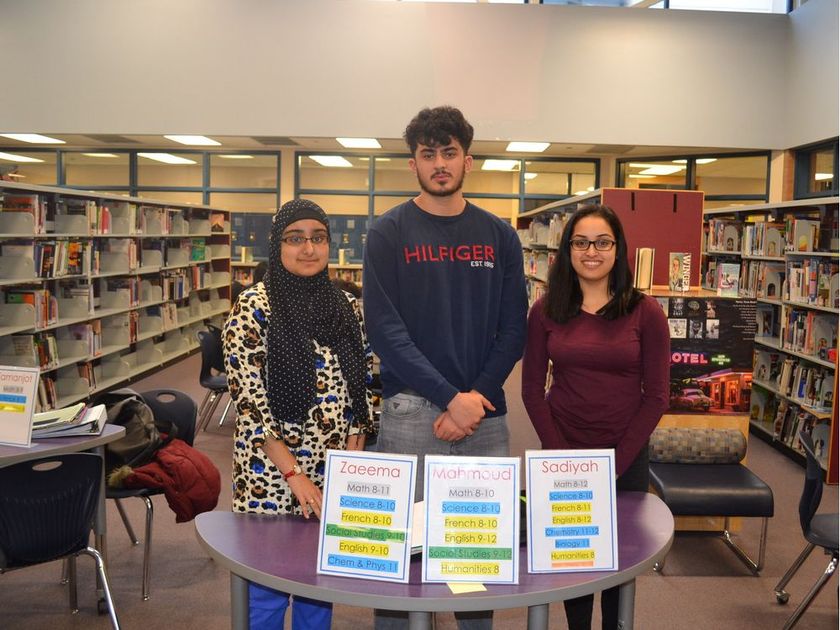 Tutors keep it real, pay it forward at QE in Whalley

The world outside can be harsh and dangerous for teenagers in Whalley but it’s countered wonderfully by the warmth and caring found in the library of Queen Elizabeth Secondary on peer-to-peer tutoring nights.

Twice a week after school as many as 16 tutors set up shop in the library like vendors in a market, each with a card on their stall advertising the subjects in which they specialize.

And on this night there are 25 customers seeking help mostly from Grades 8 and 9.

Math teacher Preet Dhillon, with colleague Lara Zalinko, help supervise tutoring nights. She said what goes on between student tutors and their peers “is crazy important.

“So many students come in here for help. It gives the peer tutors a chance to show leadership and it builds a bond between the kids,” she said.

The importance of the program for this school on King George Boulevard can be judged by the following information that accompanied the school’s application for $10,000 from The Vancouver Sun’s Adopt-A-School (AAS) campaign.

The school of 1,380 students has one-fifth of its families designated as low income, 22 per cent are single parent families, 79 per cent don’t speak English at home, 41 per cent have moved in or out of the neighbourhood in the last five years, and 12 per cent are special needs students.

“Students here will tell you they are proud of their school but also that they are concerned about the prevalence of drugs and gang infiltration, the limited availability of some supplies and technology, the level of hunger among students and the lack of opportunities here versus those in more affluent neighbourhoods.

“The peer-to-peer … mentoring program was created by staff and students to respond to the needs of students often facing tremendous personal and financial challenges.”

Part of the application is for money to help run boys’and girls’clubs and to bring in instructors for karate or yoga.

Principal Mike Jellema runs the boys’club in partnership with the RCMP whose officers come into the school just to hang out with kids.

It’s a measure of the upside down world that exists in the rough spaces outside this school that it’s necessary to do this in order to counter the negative image some youth have toward the police.

“We want them to see the RCMP in another light, that the reality is the police are the ones to help you when things get tough.”

Some of the money is needed to get kids out of this neighbourhood and show them a little of the outside world.

On this afternoon the girls’club went on a trip to Vancouver. A number of them had never been to the city before, had never been on the SkyTrain, never eaten in a proper restaurant.

“They went to the Cactus Club and for some of them that would be the first time inside a restaurant of that calibre,” said Dhillon.

Zaeema Khan, 16, Sadiyah Atick, 17, and Mahmoud Kittaneh, 17, are regular tutors and teach a rainbow of subjects each.

“When students are good in academics it boosts their self-esteem and confidence. Doing this helps me, too, it gives me a chance to learn how to teach them,” said Khan.

Kittaneh said he enjoys helping children who are struggling, such as refugee students who can’t speak English.

“Last year there was a kid who had only been in Canada nine days and he was holding his pencil differently like they do in Palestine. I spoke to him in Arabic and when he wrote the math final I was there. He passed, 70 per cent.”

For Atick tutoring is a way to pay it forward.

“There was a time when I was struggling and I used to come here for help. It’s good for me to give back to the community that once helped me.”

Make a difference. Help children in your community!