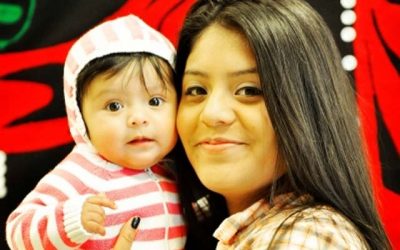 CABE looks after teen mothers and their children

For many Grade 12 students, graduation year is a hectic but fabled time of anticipation and excitement as the world beyond the classroom waits.

But for Vanessa Ellingson — the head and breadwinner of a family of three — the thought of leaving the security of Coquitlam’s smallest secondary school fills her with dread.

“I’m graduating this year and I’m scared — really scared — that I won’t be here any more,” says the mom of three-year-old Pablo and baby Marley, seven months old.

She was 15 when she had Pablo and, given the vicissitudes of life, it has taken until now to get to the edge of graduation.

Life as a high school student and a single mom on social assistance is tough enough — even with all the help she gets from staff at CABE (Coquitlam Alternative Basic Education).

And when that ends in June, she fears the abyss.

So, too, on her behalf, does principal Paul McNaughton.

“The big thing I’m struggling with is how do we prepare our kids for life after school? How do we get these kids, who don’t have any money, access to post-secondary education or job training? How do they even pay the application fees for something like Douglas College?”

McNaughton’s school on Foster Avenue is in an area of prosperous middle-class homes. There’s a tennis academy just down the street and the Vancouver Golf Club is at the end of the road. But most of his students are too poor to join soccer teams, don’t have access to organized sports and can’t afford gym memberships.

All have struggles, he said, and have been referred in from other schools, community organizations or probation officers.

Many of the 230 students are at the upper end of the Vulnerability Index, which is used by educators to rate how poverty, family relationships or other factors affect a child’s vulnerability.

CABE has 12 teen moms on the books — only 10 regularly attend — and its own YMCA daycare that looks after babies while their moms attend class.

Some mothers, like 16-year-old Brenda Ramirez, live at home and have supportive families.

Her baby is six months old and she has none of the problems with poverty and hunger faced by some of her classmates who are in care, or, like Ellingson, fending for themselves.

“Welfare is my rent. I basically get a $90 cheque from them after they pay the rent,” she says.

With child benefits, she has about $700 a month for the three to live on.

Of this, about $250 goes to fixed costs. A large chunk of that — $100 — goes to daycare as Pablo is too old for the school’s daycare. Other fixed-cost items include Hydro and cable — she would do without, but it’s for her three-year-old.

That leaves about $450 for food, clothes, diapers, bus fares and whatever sundry items life demands.

She needs the food bank to keep the kids fed and the likes of Value Village for cheap clothing.

“When I get my money I always pay my bills and I buy food. For a couple of weeks I don’t have any money. When I’m down to my last $20, I save it for milk for Pablo. I’m breastfeeding the baby,” she says.

Without the help she gets with meals at school, she’d likely be hungry for most of the week.

“A week before welfare all I have in the fridge is a little bit of food, which I won’t eat because I’m not going to eat the babies’ food,” she says. “We never have sweets or chips, stuff like that.”

For McNaughton, as with many principals in Metro Vancouver, the effects of poverty and deprivation can’t be ignored.

“We can’t do our jobs [as educators] unless basic needs are met. We just get frustrated and so we have to take them on. How can we help kids when we know there’s no food in their home — none. I’ve had to pay for gift cards for Walmart or Save-On-Foods from school funds,” he says.

His school is blessed by having a number of donors such as Telus and the Rotary Club, and private organizations that offer help. But the needs of such a high-maintenance school population quickly drains any private assistance he receives.

“We need help with such things as grocery gift cards, clothes, diapers and bus tickets. Our school covers the entire Tri-Cities area, and 80 per cent of our kids use public transit. That’s $3.50 a day for bus fares and we have a lot of families who can’t afford it.”

Gillian Allen, a youth worker responsible for the mothers and babies, is counsellor, friend and advocate. Given that these are young women who didn’t seek an abortion, it would be fitting if pro-life groups came forward to help them, she said.

Allen has attempted to take on the bureaucracy that gives with one hand but takes away with the other.

“The child tax credit they receive usually comes a few months after they’ve had their baby,” said Allen. “One girl got about $1,200 but welfare stepped in and said, ‘We’re taking that off your cheque’ so for two months she got nothing. We appealed but we lost. We’re talking below the poverty line here.”

Welfare will deduct everything over $500 a student such as Ellingson receives. So when she received a $500 bursary from the University Women’s Club, welfare was ready to seize it.

Recently, Ellingson’s family has grown by two. A classmate and her own baby are staying.

“She’s having trouble with her parents. So I told her she could stay with me,” she said.

Can she afford another two more mouths to feed?

“Not really, but we’ll manage.” 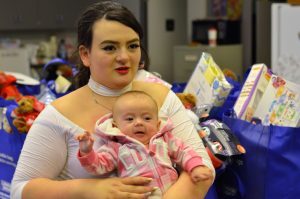